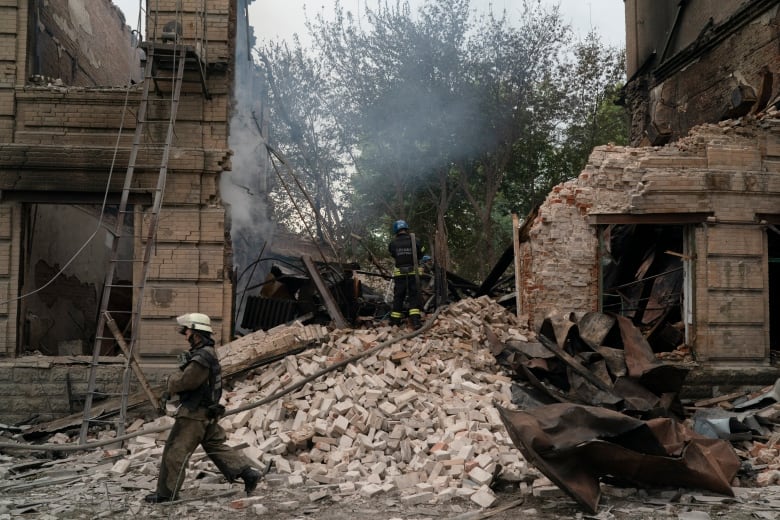 At Dover Air Force Base in Delaware, pallets of shoulder-shot anti-tank weapons are delicately and painstakingly loaded onto a plane—one of several flights each week bound for Eastern Europe and the war in Ukraine.

Each load arms Ukrainian troops on the ground, allowing them to continue fighting against a much larger Russian army.

To date, the US has pledged $13.5 billion US in security spending to Ukraine since the Biden administration took office. On Wednesday it is announced another installment of military aid – primarily weapons and equipment – ​​with a price tag of nearly $3 billion US.

President Joe Biden touted the contribution as the country’s “largest tranche of security assistance to date,” while the Defense Department said the package underscores its long-term commitment to Ukraine.

As Ukraine’s biggest financier in its conflict with Russia, Biden has previously said the US will remain determined to provide aid “for as long as it takes”.

Ukraine is heavily dependent on financial and military support from Western countries to continue its struggle that dragged on for six months this week.

But some experts say support could falter, given the potential of an economic recession, rising food prices and a looming energy crisis that could lend itself to a challenging winter ahead for Europe.

For now, however, there are no signs of delays at Dover airbase.

Although the US base is a small cog in the total war machine, its impact is not lost on Captain Annika Sims, the flight commander for air cargo operations in Dover.

“It’s to see the pilots know they have a role to play in defending a country’s freedom. That’s what we’re here for, that we’re a country that can support that downward range,” Sims told ETN News during a visit in early August . “And we do that through logistics.”

Given all the cargo going to Ukraine, operations in Dover have tripled since the start of the conflict, Sims said, and it remains “extremely busy.”

In the past six months, Sims said the base has moved millions of pounds of weapons and ammunition, as well as non-explosive and non-hazardous supplies.

Recent shipments from the US include long-range weapons, such as howitzers and Javelin anti-armor systems, intended to breach armored material, and the High Mobility Artillery Rocket System, or HIMARS, which provides long-range precision.

‘Thousands of artillery shots a day’

Six months later, it has largely turned into a war of attrition. The Russian offensive has stalled as Ukrainian forces increasingly target key facilities far behind the front lines.

The battle has also turned into an artillery war, with Ukraine consuming as many as 6,000 rounds per day. Russia – with an army about 10 times larger – would shoot many more.

Although the economic costs of the war have not yet been added up, Ukrainian President Volodymyr Zelenskyy told NATO leaders: in June that his country needed about $5 billion a month to keep its government afloat.

VIEW | A look at the weapons supporting Ukraine’s fight against Russia:

The Weapons That Support Ukraine’s Struggle Against Russia

ETN’s David Common gets a rare look at some of the weapons the US is sending to Ukraine from Dover Air Force Base in Delaware to learn more about the critical role Western nations are playing in Ukraine’s fight against Russia.

“It’s thousands just artillery shots a day — and that’s a fraction of what the Russians are firing,” said Dan Lamothe, who covers the military battle for the Washington Post.

That means Ukrainian troops are trying to hit very specific targets with their supplies, he said.

“One thing that we’ve seen a lot of lately is that the Ukrainians are targeting, not necessarily just the combat troops that Russia is throwing at them in the front, but trying to fire behind them and…hit ammunition depots and fuel depots and the like. that makes it really hard to prosecute a war without,” Lamothe said.

It is also why sustained Western support is so important to Ukraine.

For his part, Canada has pledged or delivered $626 million in military aid to Ukraine since the start of the war. (The figure does not include loans or other humanitarian aid.)

That places Canada’s military contribution fifth in the world, according to the Kiel Institute of the World Economytracking international aid to Ukraine.

And earlier this week, Canada announced it would move its military air detachment from the Middle East to the United Kingdom, in light of ongoing efforts to supply Ukraine with weapons and ammunition.

Ready for a long war

Former senior US diplomat Dan Hamilton doesn’t see US support changing, at least not in the foreseeable future.

“I don’t believe it’s just a question of money. It’s an investment in our security — and I think President Biden portrayed it that way,” said Hamilton, now a senior fellow at the Brookings Institution in Washington, D.C.

“I think Prime Minister [Justin] Trudeau, other leaders have made all that claim.”

The next six months are likely to hold a lot of uncertainty, Hamilton said, but as long as Ukraine has Western support, he predicts the conflict could continue for some time.

Both sides are betting the other will grow tired and either pull out or give in, Hamilton said, but the destruction and losses Ukraine has suffered, in the face of Russian President Vladimir Putin’s unwillingness to pull out, will likely mean a protracted battle .

“Fatigue is starting to set in,” said Hamilton. “Putin is absolutely betting that the West cannot sustain its support for Ukraine – and that the Ukrainian people cannot sustain the war. And that is his absolute calculation.”

So the best thing you can do against Putin is “show that we can keep it up and help Ukraine in the future,” he said.

According to a poll published last week by the Chicago Council on Global Affairs71 percent of Americans surveyed supported economic aid to Ukraine and 72 percent supported providing additional weapons and military supplies.

However, with the midterm elections just around the corner, analysts say the tide could turn.

What is ultimately still needed, Hamilton said, is even more military aid.

“To keep the conflict going and to bear all the enormous losses they have suffered, they need Western help. There is just no doubt about it.”

According to Keir Giles, a UK-based expert on Russia and security issues, the war may not actually be won on the battlefield, but rather through Russia’s economic stranglehold on Ukraine – and the rest of Europe.

“We have always known that winter will be difficult to maintain support for Ukraine as energy prices fueled by this blackmail by President Putin will rise,” Giles said.

“Ukraine’s primary task is still as it was on Day 1, and even before the war: to ensure that its international donors are kept aside and that the international unity that keeps it in the fight is preserved.”

In terms of unity of Ukraine’s allies, Giles said that “we have always seen cracks in support”, and Europe in particular, is divided along traditional lines.

“There are countries that recognize the importance of resisting Russia and stopping Russia in its tracks; those are the frontline states, the countries bordering Russia, the Scandinavian and Baltic states and of course the UK,” he said.

But that leaves the central countries in the European Union, which are far removed from Ukraine’s borders, thinking it might be more important to actually do business with Russia again, he said.

“There we hear the urge to Ukraine to find some kind of settlement, some kind of concession to end the fighting. Because then of course the economic pain will end,” Giles said.

But any concessions, truce or territorial surrender would be “disastrous” for Ukraine, Giles said.

Reports of prisoners participating in the battle

As with any war, there is also the human toll. On Monday, the commander of the Ukrainian armed forces said nearly 9,000 Ukrainian servicemen had died in the war — a dismal figure that doesn’t include the toll on civilians’ lives.

More than 6.8 million people have fled Ukraine since the start of the conflict, according to the United Nations Refugee Agencywhile millions of others are displaced in the country.

While Russia has not confirmed its military casualties, some estimates put the figure as high as 20,000 to 25,000. Recent reports suggest that Russian prisoners are now being recruited to the front lines as the war continues.

VIEW | Trapped in Mariupol, this mother fears she will never see her son again:

There is growing fear in Ukraine that some of the veterans captured from the battle of Mariupol will be subjected to Russian show trials. Susan Ormiston speaks to a prisoner’s mother who fears she will never see her son again.

ETN News contacted the Russian embassy in Canada to inquire about casualties and reports of depleted military resources. In an email response, it said there is no problem with staff shortages, nor are there any problems with inventories.

Russia has “sufficient capacity and capabilities to promote and defend our national interests,” the statement said.

“Our troops on the ground are composed exclusively of professional military personnel. It is a highly capable, compact force, fully capable of performing all the tasks set forth by the High Command.”

When asked how long Russia plans to continue its military operation in Ukraine, the embassy said: “The operation will take as much time and effort as necessary to achieve its objectives.”