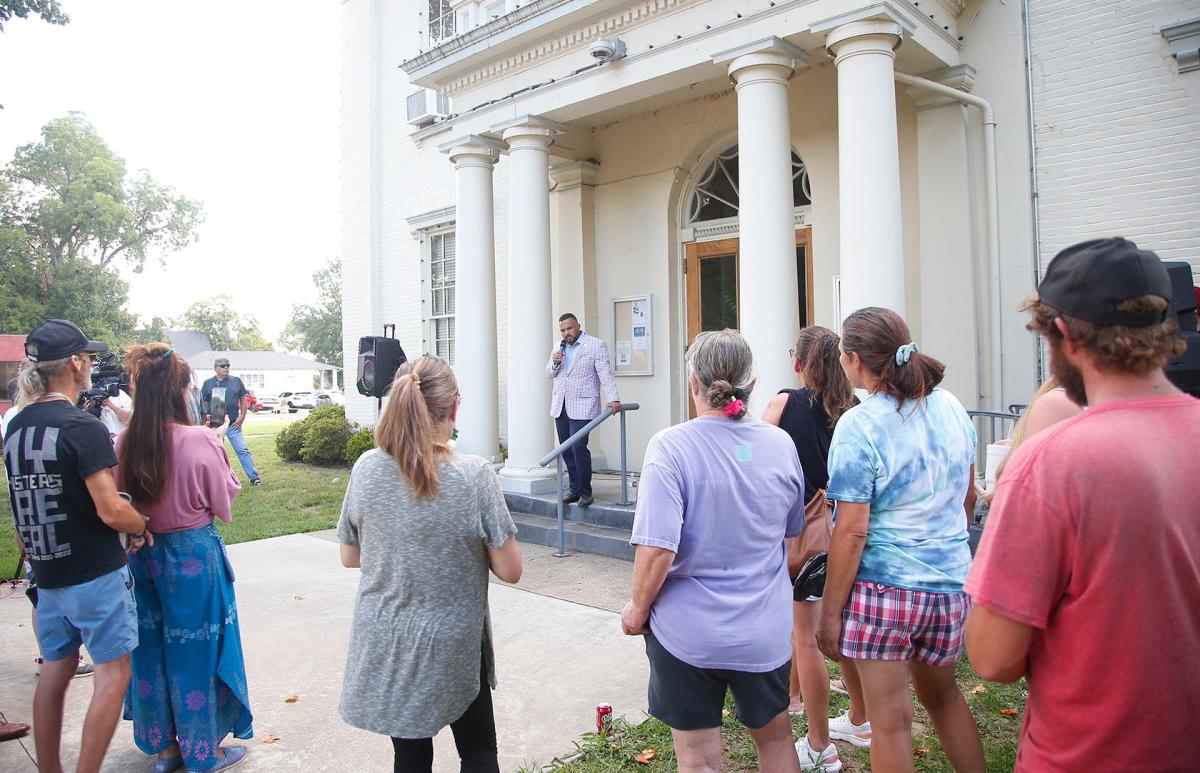 Derek Van Voast said he is tired of police brutality being interpreted as the work of a few bad apples.

Van Voast, of Springdale, who has worked as an assistant to Rev. Jesse Jackson, organized a Saturday meeting at Van Buren in response to the August 21 assault of Randal Ray Worcester during an arrest in Mulberry.

The arrest, which was captured on video, was later called “reprehensible” by Governor Asa Hutchinson after it circulated widely on social media. Crawford County Sheriffs Levi White and Zach King and Mulberry Officer Thell Riddle have been suspended pending the outcome of investigations by state and federal authorities.

“I’m tired of hearing about bad apples,” said Van Voast. “Now police officers, before you jump on me and before you attack me, and blue life matter should be here to kill, let me finish first. Now I’m going to tell you there are no bad apples. They’re all bad apples, let me finish it now, for the orchard itself is bad.”

Van Voast called for accountability and transparency in the situation.

“Violence is not the answer. We’ve heard that so many times. But the police are not the problem. It’s every individual action, and the problem is liability,” he said.

The US Department of Justice is investigating the arrest of Worcester, who suffered a blow to the head and a knee in his side while being held on the sidewalk during the arrest. Video released since the arrest shows Worcester tackling White before he was beaten. White suffered a concussion when his head hit the pavement.

Worcester had been charged with making threats against a store clerk in Alma before the brutal arrest in Mulberry.

At the meeting, Tammy Nelson said she was one of Levi White’s victims.

“I was attacked just before the lord was beaten, which is why I support here that we need to stand up for our, you know, civil rights and take back our freedom and stop this brutality by the police because it’s to the point where we can’t talk . Who should you call if you have been violated by them? You can’t ask for protection,” Nelson said.

She said more and more people are talking about their experiences of abuse by law enforcement.

“People have to keep speaking their minds because if we don’t do nothing, nothing gets done and we end up, slipping through the cracks again and we’re going right back to the beginning; and we have to think about the future of our children, our grandchildren, we don’t want to leave this world and leave this to them,” Nelson said.

Skeen called on officials to spend more money on de-escalation training, mental health and drug rehabilitation, rather than military weapons for police and new prisons and jails.

Skeen has been protesting police brutality for 55 years.

“It’s 55 years later and I still have to do the same thing, because that young man could have been one of my sons. I don’t care what he did. He did it. Let him take his time, but you’re not kidding him,” Skeen said.