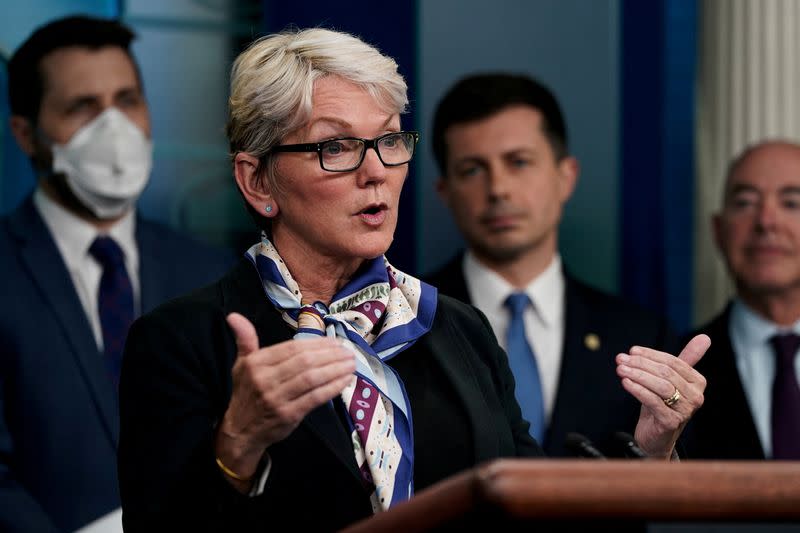 WASHINGTON (Reuters) – The US Secretary of Energy this month urged domestic oil refineries not to increase exports of fuels such as gasoline and diesel further, adding that the Biden administration may need to consider taking action if the factories do not stockpile.

“Given the historic level of US refined exports, I urge you once again to focus on building inventories in the United States for the short term, rather than selling current inventories and exports,” Granholm said in the letter to refiners, a copy of which was seen by Reuters.

High exports of oil products from the US were a concern for President Joe Biden’s administration this summer, as gasoline prices briefly hit a record $5 a gallon, helping to push inflation to its highest level in 40 years. Gasoline prices have since fallen to about $3.86 a gallon.

Federal weather forecasters have forecast an above-average Atlantic hurricane season, which could be a dangerous time for refineries. Still-high gasoline prices remain a threat to Biden’s fellow Democrats ahead of the Nov. 8 midterm elections, when they hope to retain control of both houses of Congress.

Granholm said the government is in talks with state officials along the east coast, where gasoline levels are at their lowest in nearly a decade. It is putting gas and fuel oil reserves in the northeast US, which contain 2 million barrels of fuel, on “active standby” for possible release, and is preparing other emergency measures, she said.

The government hopes companies will “proactively address this need” to build inventories, she said. If not, the government will have to “consider additional federal requirements or other emergency measures,” Granholm added, without providing details.

At an extended meeting with the same refineries in June, Granholm withdrew a plan to ban U.S. fuel exports, but the idea was never completely off the table.

Refineries have said a ban could flood domestic markets with fuel and cause some plants to cut production, which could reduce supply and put upward pressure on prices.

In addition, Northeast refineries import crude oil and fuels, trade that could be affected by an export ban.

“The export talks are at best a distraction; at worst counterproductive on price and supply,” said a source familiar with Granholm’s talks with refineries.

Truss defends tax cuts in pursuit of ‘decade of dynamism’