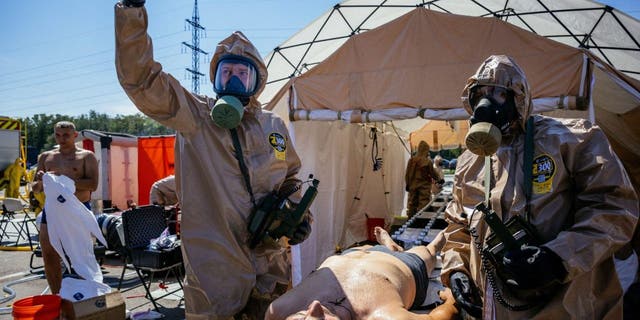 Ukrainian nuclear company Energoatom said on Saturday there is an increased risk of a dangerous hydrogen or radioactive leak at the Zaporizhzhya Nuclear Power Plant (ZNPP), after it was damaged by shelling in recent weeks.

“As a result of periodic shelling, the infrastructure of the power plant has been damaged, there is a risk of hydrogen leakage and sputtering of radioactive materials, and there is a high risk of fire,” the nuclear service said in a statement.

Rescuers from the Ukrainian Ministry of Emergencies attend a drill in the city of Zaporizhzhya on August 17, 2022, in the event of a possible nuclear incident at the Zaporizhzhya nuclear power plant near the city.
(DIMITAR DILKOFF/ETN via Getty Images)

Shelling on or near the ZNPP has increasingly threatened Ukraine’s nuclear security in recent weeks, and officials have warned that damage to Europe’s largest nuclear power plant could cause a catastrophe bigger than the 1986 Chernobyl disaster.

Earlier this week, two of the plant’s reactors were disconnected from the grid when power lines were damaged by shelling and emergency protection systems were activated.

Ukrainian workers — who have continued to operate the site since March despite Russian occupation — were able to restore “stable power” to the plant on Saturday and reconnect it to Ukraine’s electricity grid.

Ukraine and Russia have blamed each other for the damage to the nuclear power plant, but Kiev and the international community have argued that the threat of nuclear disaster remains as long as Russian forces continue to occupy the Ukrainian nuclear power plant.

“Due to the presence of the Russian military, their weapons, equipment and explosives in the power plant, there are serious risks to the safe operation of the ZNPP,” Energoatom said on Saturday.

The nuclear agency said Russian forces have increased “pressure” on Ukrainian personnel operating the site “to prevent them from revealing evidence of the occupiers’ crimes at the factory and its use as a military base.”

A rescue worker from the Ukrainian Ministry of Emergencies attends an exercise in the city of Zaporizhzhya on August 17, 2022, in the event of a possible nuclear incident at the Zaporizhzhya nuclear power plant near the city.
(DIMITAR DILKOFF/ETN via Getty Images)

Reports surfaced on Saturday that Russian troops “tortured” the plant’s staff ahead of the International Atomic Energy Agency’s visit, as the UN tries to secure the site.

“Ukraine calls on the world community to take immediate measures to force Russia to liberate the ZNPP and transfer the power plant to control of our country for the sake of the security of the whole world,” Energoatom said.

Caitlin McFall is a ETN News Digital reporter. You can reach her at [email protected] or @ctlnmcfall on Twitter.