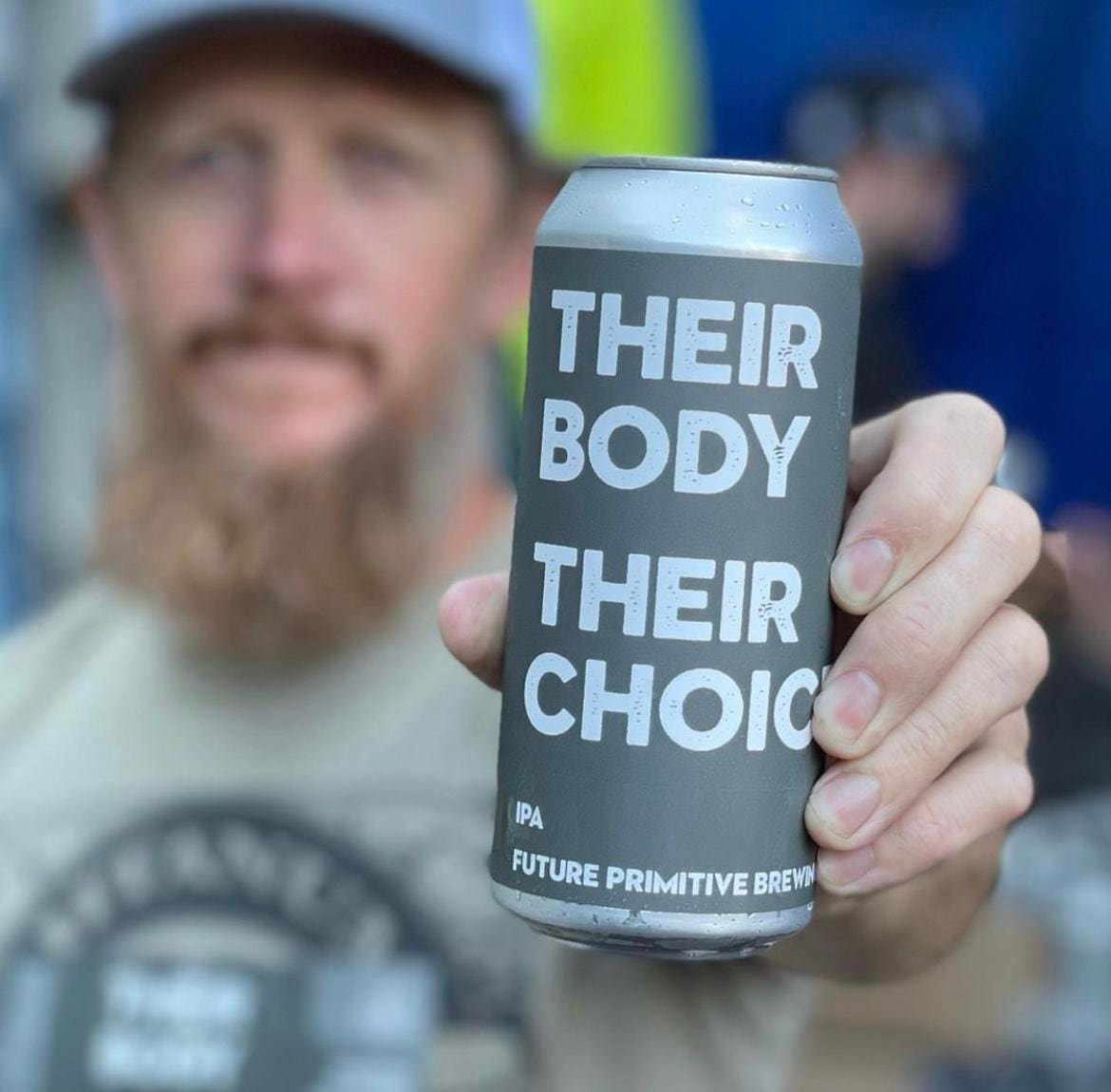 Future Primitive Brewing Company just released an IPA in cans that reads “Their Body, Their Choice” and is expected to sell out in a flash. This is why the founders of this craft brewery find it essential to show their support for reproductive rights in these highly politically charged times.

This project was launched by a group that had been active in the craft beer industry for many years. Shortly before its 2018 debut, Washington Beer Blog’s Kendall Jones wrote that it was one of the highly anticipated openings in years: the ownership team of Mike Baker, Dean Hudgins, Ian Roberts, Kevin Watson and Larry Soloman “bring a lot of experience and know-how to the table. ”

For example, head brewer Watson had worked in the sprawling Elysian Fields, now owned by Anheuser-Busch InBev. Hudgins and Roberts own the popular Pine Box bar on Seattle’s Capitol Hill.

Early on, the Future Primitive mission was clear: to make stellar beer while embracing social justice and celebrating local creatives. For example, they created an IPA called Rebel Girl in honor of a local activist and musician, Kathleen Hanna. The beer’s description was a moving tribute and a call to action: “The influential and very living Pacific Northwest native and front woman of Bikini Kill, Le Tigre, The Julie Ruin and others helped lead the way toward gender equality.” and safe spaces for women and children for more than three decades. For more information, visit SafePlaceOlympia.org.”

The Future Primitive team has created an Imperial Stout called Black is Beautiful, with a portion of the proceeds going to the NAACP Legal Defense Fund. That was part of an international partnership involving nearly 1,000 breweries in 19 countries, spearheaded by Weathered Soul Brewing in San Antonio.

And one of the bestsellers is a German-style lager called Nazi Punks F**K Off: “In an age of misinformation, crime, malice and milquetoast politics, we are reminded that the noxious flames of fascism are still flicker, even in the light of day; sow fear and contempt to feed his unworthy self. And who but us will smother those flames with resilient perseverance, leaving the ashes cold, forgotten, and blown away; to give new life to righteous compassion and joyous prosperity.”

“I feel like most left-wing entrepreneurs are reluctant to voice opinions because they’re afraid of alienating customers, but we’re a smaller company with punk rock roots and I think we’ve decided whether or not we’re standing up for ideals in a open road, what are we really doing,” Watson said in a telephone interview. “We think it’s important to be loud. Yes, we are trying to pay the rent, but we also want to draw attention to a good cause.”

For Roberts, the motivation is very personal: “I have two small children, two daughters and I do my best to leave the world a better place. That’s not happening now and it’s scary.”

Finding the connection between music and beer is not difficult in this corner of the country. One of the brewery’s first high-profile projects was a collaboration with the band Thunderpussy, a beer release to honor the landmark Supreme Court decision allowing members to trademark the name. The team was introduced to these dynamos by a former bartender who was a friend.

It was a fun project that led to more crossover and the continued inflection of Future Primitive’s evocative prose to describe the partnership that produced an IPA like no other: “Drinking this beer can cause side effects such as consciousness expansion, higher frequency vibrations, extreme levels of STOKE, and the ability to proudly shout ‘Thunderpussy!’ The combination of Amarillo, Cashmere, Galaxy, HS-Sitiva and Mosaic hops may taste expensive, but hey, you have expensive taste.”

Their body their choice

When Roe was overthrown by the Supreme Court in June, the Future Primitive team was immediately activated and the release of Her Body Her Choice was announced. It sold out within days and a portion of the proceeds were donated to the National Network of Abortion Funds.

The latest version of the IPA aims to be more inclusive and the feedback is already overwhelmingly positive. “We have heard from many transgender people and their families that they are grateful. They thanked us for seeing them,’ said Roberts.

Consumers will definitely notice the large font used on the cans of this limited release, and it’s no coincidence: “We didn’t want the message lost.”

This kind of effort comes with an extra bonus, the business partners agreed. “We’ve had such positive feedback from our wholesale customers,” said Roberts. “Some – like Highland Park Corner Store – have even done their own fundraising around this project.”

While no special events are planned around the latest launch, the Future Primitive Taproom is always a vibrant destination with a rotating lineup of food vendors, including Lenox Afro Latin Soul Food and Farm Boy Bites.