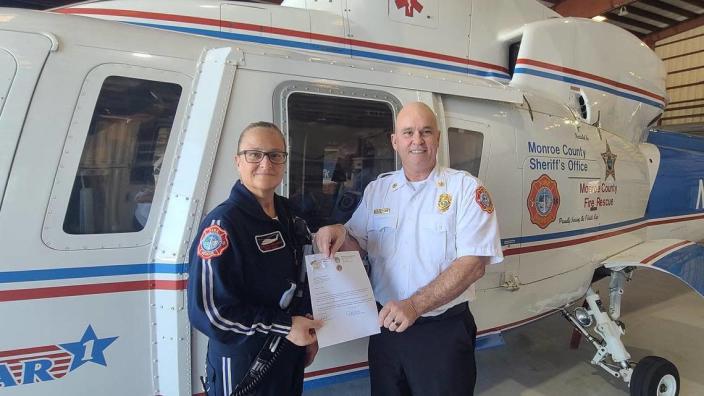 Weeks after the Monroe County Fire Rescue chief flight nurse was arrested on charges of stealing narcotics from the department’s ambulance fleet, a paramedic assigned to the program was arrested, charged with tampering with evidence and official misconduct, according to the office of the county sheriff.

The sheriff’s office detectives put Damian Roberto Suarez, 44, in the county jail Friday night. Information about his bail and legal representation was not immediately available.

According to the sheriff’s office, Suarez lied to detectives about his knowledge of an ongoing investigation into the theft of drugs, including morphine and a potent sedative after surgery, by Lynda Jayne Rusinowski, 56, the chief flight nurse for the Trauma Star Air of the United States. province. ambulance program.

“While this is a troubling case, it does not reflect the vast majority of men and women at Monroe County Fire Rescue. That said, anyone who obstructs a criminal investigation under these circumstances will be held accountable,” Sheriff Rick Ramsay said in a statement.

Suarez’s work history at the fire service and his salary were not immediately available Friday night.

Detectives say Suarez deleted text messages and photos from his cell phone related to the investigation after warning him not to, said Adam Linhardt, a spokesman for the sheriff’s office.

Monroe County Fire Rescue, which hires nurses and paramedics for its three-helicopter Trauma Star program, reported missing medications in late July. The drugs are stored in the helicopter hangar in the Middle Keys town of Marathon. Detectives also said the program’s drug logs were inaccurate.

In October 2013, firefighters discovered vials of morphine and an intravenous anesthetic called Etomidate were missing from the medicine storage room in the helicopter hangar.

In 2010, an EMT captain assigned to Trauma Star removed unspecified medical supplies from the hangar to provide medical assistance to a local volunteer firefighter at his home.

Both cases were made public after a series of stories by the Miami Herald/FLKeysnews.com about the missing drugs and missing supplies.