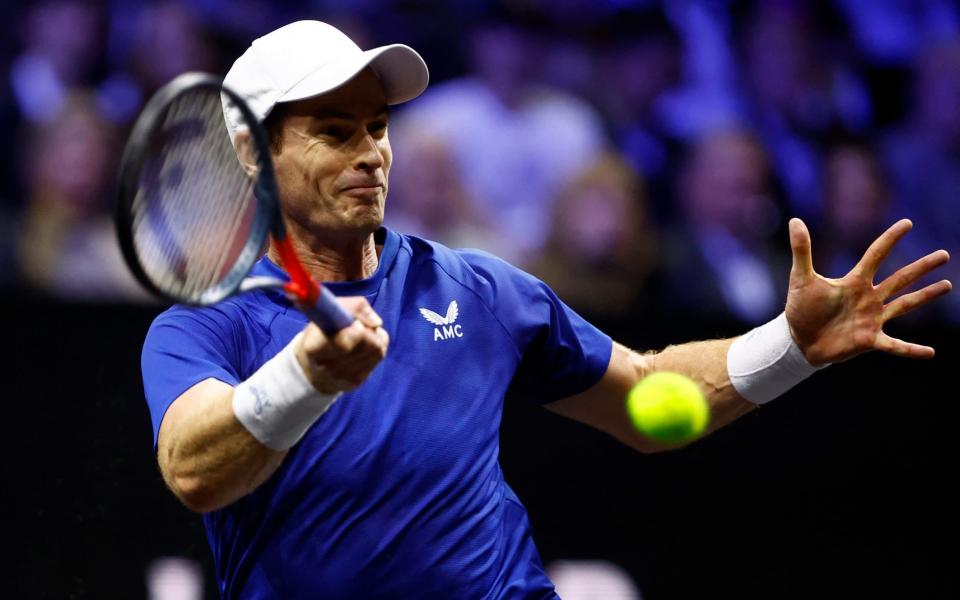 …Murray takes the opening set 7-5. That was a grueling first set that ended with a double fault by De Minaur.

In case you missed it

The day session was disrupted by a protester who set their arm on fire.

More sensational tennis from Murray leads to a deficit. In the initial phase it is 3-3.

The stars are in the building

Long opening game on the Murray service. Could be a theme of the contest.

Incredible point from both players, Murray in defense somehow keeps himself in the point, but De Minaur hits a forehand winner to break.

…Murray will serve first and start the game!

We have the captain and player introductions.

Team World’s John and Patrick McEnroe lead their team, including Alex De Minaur, who will be in action tonight.

In the day session, world number 2 Casper Ruud ensured that Team Europe had the best possible start when he defeated Team World’s Jack Sock in a tiebreak in the third set.

It means that Europe has taken a 2-0 lead.

The Laver Cup is a three-day tournament in which a team of six of the best tennis players from Europe compete against six of their counterparts from the rest of the world.

The tournament is named in honor of Australian tennis legend Rod Laver, the only man to win two grand slams in a calendar year.

Each match won is worth the following:

Nicknamed ‘Fedal’, Federer and Nadal have a legitimate bromance together. And it’s fitting that Federer’s last game as a professional tennis player will be with the man he shared so many special moments with on a tennis court.

It’s a different kind of pressure. After all the great things we’ve shared on and off the track together, it will be something wonderful and unforgettable for me to be a part of this historic moment. I hope I have a good chance to play at a decent level, and hopefully we can create a good moment together and maybe win a match. So let’s see.

Of course being on the track, having Roger next to me one more time, will be something I’m really looking forward to. I’m just really happy about that. It will no doubt be difficult to handle everything, especially for Roger. Also for me. You know, eventually one of the most important players, if not the most important, in my tennis career leaves. I’m going to try to do my best in every way possible to make this moment even more special than it will be.”

Andy Murray will return to the O2 for the first time since winning the 2016 ATP Finals. He will open the night session for Europe against Alex de Minaur of the world.

The Minaur won the final meeting in 2019 and the Australian, nicknamed Speed ​​Demon, will be a tough test for the Briton.

Who is in Team Europe?

Roger Federer has admitted that realizing he would never win another Wimbledon title brought him to tears last summer.

The 41-year-old, who announced last week that he would retire after the ongoing Laver Cup, revealed that he collapsed after losing to Felix Auger Aliassime in the lead up to his final Wimbledon in 2021.

He fed on the majesty of his serve and was still able to come forward and win short points. But once his opponent had the upper hand in a rally, he couldn’t scramble the balls back for long.

“When I lost to Felix in Halle [in June 2021]I cried after the match [as] I knew I wasn’t going to win Wimbledon,” Federer explained. “You get to a point where you create too many moments to defend against certain players of the good level. [But] there is nothing left to defend. So I had to play extra offensively and just try to work my way through the games in this way.”

It may seem strange to imagine Federer – the male record holder for Wimbledon titles – having to “weasel” his way through matches, especially on grass. But looking back at that 2021 Wimbledon Championship, he needed a little help in his first round encounter with the clumsy Adrian Mannarino, who went ahead alone when Mannarino fell and sprained his knee as he led by two sets to one.

It’s a testament to the sport’s ruthlessness that Federer went out with a 6-0 bagel set, just as Donald Bradman registered a duck in his final innings and Usain Bolt sustained a hamstring in the 4x100m relay.

“The end of that game was one of the worst moments of my career because I felt really terrible,” said Federer. “It was over, the knee was gone and when I knew I had to confront the media in a short time right after, it was very difficult. But for me it is what it is. You know you can’t turn back time and say : ‘Oh, we should have changed this.’

“And that’s why I’m so happy that I’m on my left knee [which had undergone a similar operation four years earlier] I was able to come back and win three more slams, including that 2017 comeback win in Australia.

“Because I had a good experience with my left, I thought, ‘Okay, my right is a very similar operation. We’ll do that and maybe I’ll get another chance.’ Look, it wasn’t supposed to be, and then of course the last three years have been pretty tough. You’re dealing with it. When I go through rehab, the daily progress is small, but I want to be healthy for life. So it was well worth it.”

Federer admitted he regrets his decision to undergo surgery on his right knee in February 2020. As he told reporters at the O2 Arena this week, he never regained the smooth movement of yesteryear despite the best part of 18 months of rehab.

“When I came back [from the 2020 Australian Open] I was so unhappy with my knee and I had been unhappy for a number of years,” Federer explained. “So maybe I should have that surgery, maybe I shouldn’t have done it afterwards. I had played and that it would have exploded at some point.

“At that point, I was 100 percent convinced that this was the right thing to do. I did the surgery, it was successful, and six weeks later I have to do another one because something is wrong again. I mean, you just can’t predict things like this. There is always a risk when you open something. That’s why I always said, ‘It’s the beginning of the end once you’ve had surgery.’”

Man City vs Man United live streaming: How to watch, MCI vs MUN dream11; everything you need to know