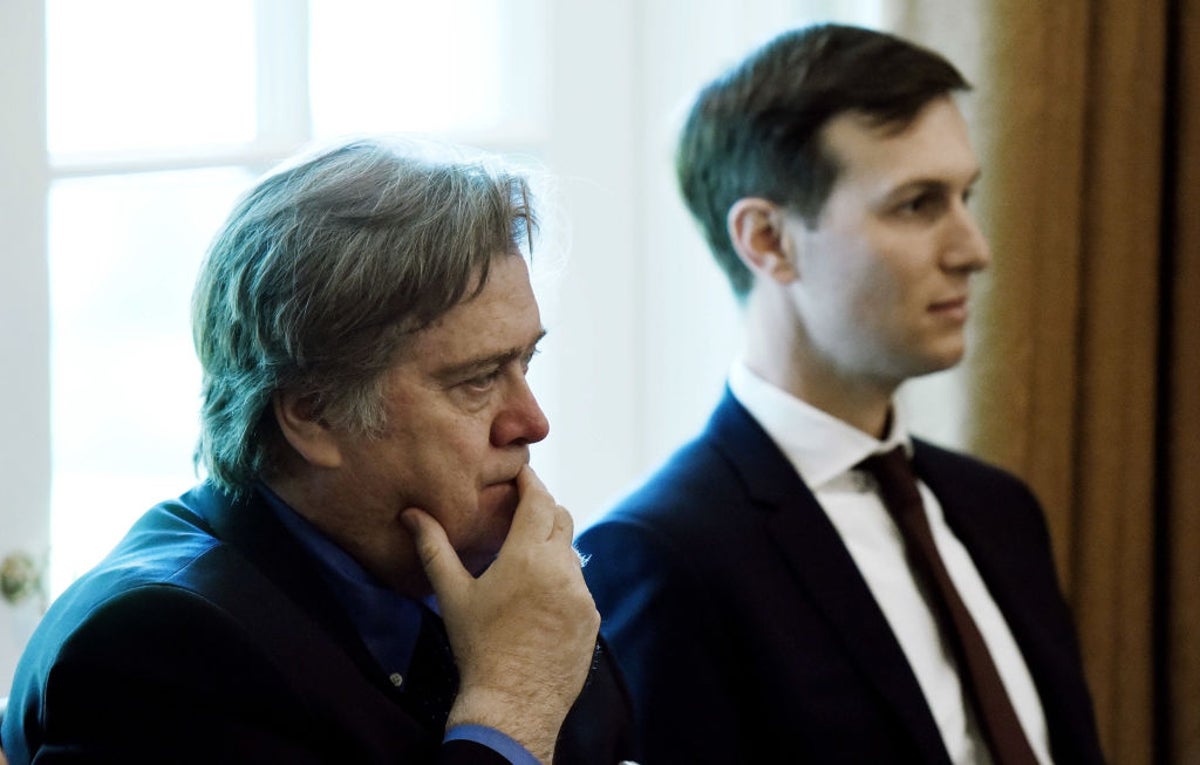 Jared Kushner has described Steve Bannon as “a suicide bomber” who “blew” during his time in the White House, as the former president’s son-in-law continues to do the rounds to spark interest in his new memoir.

Former White House senior adviser and husband of Ivanka Trump targeted Bannon in an interview The Hugh Hewitt Show on Friday, calling him “divisive” and accusing him of “knife fights” with other members of the Trump administration.

While the former White House strategist was a “great partner” to Donald Trump during his 2016 presidential campaign, Mr. Kushner said “the power went to his head” as they entered the White House.

“I think maybe the power went to him a little bit, or he was just more of what he was,” he said of Bannon.

“It became very divisive. He undermined us, knife fights with colleagues, and it just didn’t help us carry out the agenda.”

“That was really unfortunate, but one thing I write about in the book is – I go through a lot of the different interpersonal dynamics – is that I didn’t beat Steve in the end.”

He added: “Steve really beat himself, you know. His head got so big that he just did all these crazy things, and eventually, you know, like a suicide bomber, it exploded.”

His comments mark just the latest battle of words between the two men known to have had a fraught relationship since almost the very beginning of Mr. Trump’s presidency.

In Mr. Kushner’s new book Breaking History: A White House Memoirhe refers to his former colleague as a “cancer” and claims he threatened to “break up” [him] in half” during a particularly heated spit.

“Steve, you need to stop leaking about Gary. We’re trying to build a team here,” he tells Bannon.

According to Mr. Kushner, Bannon fired back by saying that Mr. Cohn was “the one who leaked on me” and warned him to “don’t fuck with me”.

“Jared, right now you’re the one who’s undermining the president’s agenda…and if you go against me, I’ll break you in half. Don’t meddle with me,” he would have said.

Despite no love being lost between the two men, Kushner claims in his memoir that he did not oppose his father-in-law’s decision to grant Bannon a presidential pardon.

Bannon, the former boss of right-wing website Breitbart News and a longtime Trump ally, joined Trump on his campaign trail and became a White House strategist when he took office.

But several months later, in August 2017, he was fired from his position amid reports of an escalating feud with Mr. Kushner and other senior advisers.

Bannon was subsequently charged with a massive fraud scheme involving raising funds to build Trump’s border wall between the US and Mexico.

The former president pardoned him in his last days in office.

Bannon now faces new legal issues over his support of the former president.

In July, he was convicted of contempt of Congress after refusing to comply with a subpoena to testify before the House committee investigating the January 6 attack on the United States Capitol.

Meanwhile, Mr. Kushner has been plugging in his new memoirs in recent weeks, which have been brutally labeled “serious and soulless.” New York Times review.

The former Trump adviser has also denied any suggestion that he could be the “mole” who tipped off federal agents about the treasure trove of top-secret documents found by federal agents in Mar-a-Lago.

The FBI executed a search warrant on the former president’s Palm Beach home as part of an investigation into whether Mr Trump violated the Espionage Act.

A total of 27 boxes were seized, including 11 containing classified information. Some of the information was of the highest possible top-secret classification, meaning it should never have left government custody.

On Friday, the DoJ released the heavily redacted affidavit, saying there was “probable reason to believe that additional documents containing classified [national defense information] or which are presidential records subject to record retention requirements currently on the premises.”

“There is also probable reason to believe that evidence of obstruction will be found in the property,” the affidavit said.

It is unclear from the editors who the government sources are.

Several people, including Mr Trump’s niece Mary Trump, have speculated that the tip could have come from Mr Kushner. He denies the charge.

‘We have our miracle’: Americans captured during fighting in Ukraine return home to Alabama