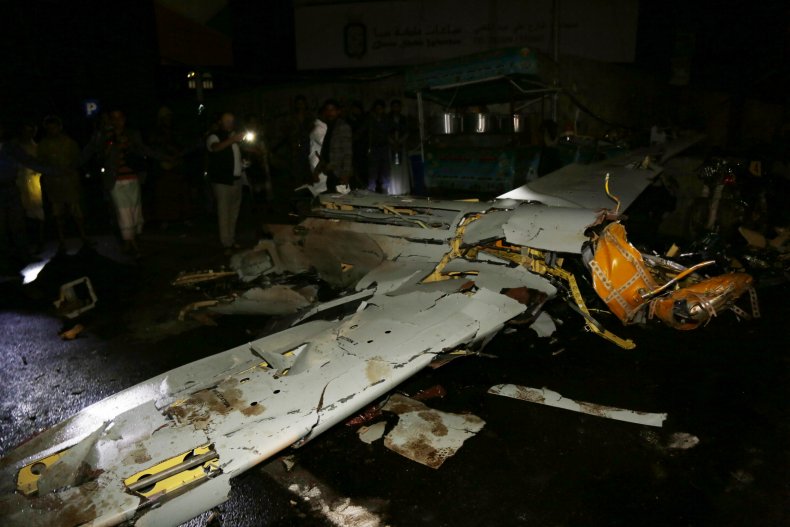 Ukraine says it destroyed several Iranian-made “kamikaze” drones that Russia used in an attempt to ramp up airstrikes.

The Ukrainian Armed Forces Air Force Command said on Facebook on Thursday that four Iranian “Shahed-136” drones were “shot down at once” in the Mykolaiv region by medium-range anti-aircraft missiles. Ukraine’s Operational Command South (OCS) said at least five of Iran’s unmanned aerial vehicles (UAVs) used in Russian attacks that caused damage, but no human casualties, in the region on Thursday.

“The enemy continues to conduct aerial reconnaissance using UAVs and also activate air strikes with Shahed-136 type Iranian kamikaze drones,” OCS said in a Facebook post. “In this way, Ochakov’s harbor infrastructure was hit again. One of the two attacking drones was shot down by our units, the other hit a harbor tugboat. The fire service promptly extinguished the fire. There are no casualties.”

“Another kamikaze drone ‘Shahed-136’ attacked Kryvyi Rih,” the post continued. “As a result of hitting a two-storey utility building, a fire broke out, which was promptly extinguished. There are no casualties.”

Ukraine said a Russian reconnaissance drone was also destroyed in Mykolaiv. Multiple howitzers, tanks and armored vehicles were also reportedly destroyed, while Ukraine claimed to have killed at least 27 Russian troops. News week has not independently verified any claims made by Ukraine.

In addition to drone strikes, Thursday’s Russian offensives are said to include a significant number of missile and artillery strikes. Russia is said to have “terrorized” the Nikopol district with rocket attacks, killing a Ukrainian civilian and destroying schools, a museum and residential buildings.

OCS warned Ukrainian residents to avoid “panic” and urged them to heed the government’s warnings and remain vigilant in the face of possible new airstrikes, including further attacks with kamikaze drones.

“Don’t panic, but keep an eye on the situation,” OCS said. “The enemy can activate missile terror, increase shelling and continue to launch kamikaze drones. Do not ignore air threat messages, monitor the situation and actions of suspicious persons, inform the appropriate authorities.”

Ukraine also this month reported the destruction of a Shahed-136 drone near the frontlines of the war in the Kharkiv region. The British Ministry of Defense said Russia was forced to use weapons sourced from countries such as Iran and North Korea as its own supplies dwindled.

See also  This is the latest in a grim history of deadly episodes in football stadiums.

The Iranian-made drones are considered technologically superior to the Turkish-made Bayraktar TB2 combat drones used by the Ukrainian military, with the ability to fly nearly 1,100 miles further while carrying payloads weighing 500 pounds more.

Iran previously denied sending the Shahed-136 drones or other weapons to Russia. However, the head of the country’s Revolutionary Guards later boasted about arming the world’s top powers, according to the Europe Times News.

White House press secretary Karine Jean-Pierre said at a press conference on Aug. 30 that Iran had sent Russia both Shahed-136 and Mohajer-6 drones, with the UAVs transferred to Russia “over the course of several days in August.”

News week has contacted the Russian government for comment.