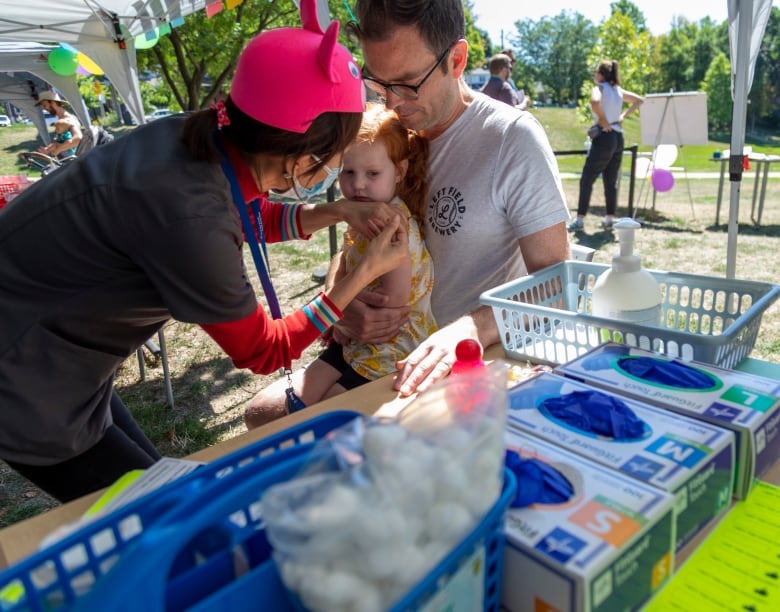 This First Person column was written by Bronwyn Bragg who lives in Calgary. For more information on ETN’s First Person stories, see: the frequently asked questions.

It turns out that it’s actually hard to tell if your baby is just constipated or if he’s having trouble breathing.

I learned this when my 10-month-old Robin struggled to breathe before bed.

When Health Canada first approved vaccines for children under five, I was cautiously optimistic. This was the moment our family had eagerly anticipated; the extra layer of protection for kids that we felt had been left behind in the rush to ‘return to normal’. In July, other provinces were rolling out their vaccine programs for that age group, but we live in Alberta, which has been slow to come up with a plan.

The day before vaccine bookings opened in our county, on August 1, my three-year-old son, Henry, tested positive for COVID-19. Two days later, his brother, Robin, developed a fever and also tested positive with a rapid home test.

As Robin’s fever passed quickly, his congestion went from bad to worse.

We consulted the mother hive (texting and calling several mother friends) and decided to take him to the hospital. After waiting three hours for the emergency room, a doctor confirmed that Robin… croup and in fact he was having trouble breathing.

His breathing difficulties were treated with an oral steroid and two doses of epinephrine, which is delivered by tying a small breathing mask over the baby’s face and holding it there while the medicine flows into their nose. My husband and I had to restrain Robin as our baby fought, screamed and cried as he tried to remove the mask.

Since he is the youngest member of the family, none of us can prevent Robin’s name from preceding the word baby.

Unlike his big brother who jumps from the couch to the floor, Baby Robin still only learns the joys of pulling himself up to standing, of half crawling, half dragging the floor to the dog bowl to splash water, and of smacking blueberries in his face.

In the hospital, despite the intrusion of respirators and X-ray machines and many unknown strangers wearing masks and protective medical equipment, Robin remained a mostly cold baby. At one point, he gently offered his stuffed rabbit to the nurse. A kind of peace offering. As if to say, “I know you take care of me, maybe you want this bunny?”

Baby Robin will be fine. We were eventually sent home after he’s responded well to the medication and he’s back to his baby-busy work.

But as I put the disgusting but necessary face mask over Robin’s mouth and nose and watched him struggle and suffer, I felt like I was in a tunnel, rethinking the choices we’d made as parents over the past two years.

Sending Henry to daycare was both a financial necessity and crucial to his social-emotional development. But it also inevitably meant we would get COVID-19. If we didn’t send him, as we did during the first 14 months of the pandemic, it meant we might be protected from COVID-19, but we might still have a child who was shy and introverted from other kids in the playground.

I thought how stupid it was that I was sad that I had choices. “Be thankful,” I told myself, revisiting a familiar refrain from the past two years: “At least we have choices.”

I thought of the email from our daycare center in early July informing families that it was no longer necessary for COVID-positive children to stay at home. Although it is ‘recommended’, it is no longer a requirement.

I thought about all the competing messages I’ve heard over the past two years:

“Children are not seriously affected by COVID.”

“Eventually we get it all.”

“Nurseries are full of germs; it’s good to be exposed early to build immunity.”

But also: “Wear a mask if you are in a crowded indoor space.” (Has anyone who makes health policies recently been to a daycare?).

“Long COVID is a real thing.”

“There are pediatric deaths from COVID-19.”

Then I thought how stupid it was that I believed that mine choices would make a difference; that somehow the decisions I made were the right ones.

The myth of the past two years has been that as individuals, by exercising our ‘personal responsibility’, we can protect ourselves and our children.

Former British Prime Minister Margaret Thatcher famously said that there are “no such thing as society. There are individual men and women and there are families.“For the past two years it has felt as if Thatcher’s impoverished and unimaginative idea of ​​our collective responsibility to each other has come true.

It’s one thing for a family like mine, with our many privileges, insulated from the worst extremes of calamities of all kinds, from COVID to acts of violence from racism to poverty to homelessness, to “manage our risk”. It’s quite another to have a policy device that downloads all risk management on individuals and families and in turn tells them that the disasters that befall them are their fault.

Do you have a similar experience to this First Person column? We want to hear from you. Write to us at [email protected]