In response to a petition filed by whistleblower John Githongo to the Supreme Court, Chirchir claimed he only knows blogger Dennis Itumbi.

Speaking on Saturday, August 27, Chirchir added that their role in helping William Ruto win the presidency had nothing to do with the IEBC system.

“I don’t know any of these individuals on the list, except Dennis Itumbi, who I’ve had contact with over the years. He and I have not collaborated in any way in connection with the presidential campaign, nor before the election, on the election date and/or while counting,” said Chirchir.

He further rejected reports that he was working with Itumbi and other teams of supervisors to oversee the process of manipulating the forms before they were re-uploaded to the IEBC portal.

See also  'One of my heroes': Schwarzenegger joins politicians to pay tribute to Gorbachev

He further emphasized that he was actively involved in Ruto’s presidential campaign secretariat. According to the ICT guru, Kenya Kwanza had devised a more organized pattern to monitor the presidential elections.

Chirchir maintained that the polls were conducted transparently and credibly.

“That to my knowledge, Ruto had set up the WSR Presidential Campaign Secretariat, which was located in an office on the 2nd floor of Soin Arcade in Westlands. Ruto had enlisted staff to assist him in his campaign,” Chirchir explained.

Itumbi – as he appears on NTV on Friday, August 26 – also rejected Githongo’s claims, adding that Ruto’s secretariat only verified the results uploaded on the IEBC portal.

Githongo claimed that a team of ten supervisors and 46 other individuals were tasked with accessing, entering and manipulating the data in the IEBC portal.

The human rights defender added that the team was tasked with maintaining the total number of valid votes cast, thus subtracting votes from one presidential candidate and adding them to another.

Their job was to receive the forms 34A from the KIEMS kits sent to their server/platform which he named Uchaguzi Tallying. Upon receipt of the said data they would edit the necessary forms 34A according to the instructions given to them by their leaders. and then upload the said edited Form 34As to the IEBC portal.

“The team was indoctrinated with the phrase ‘freedom is coming’ and that they should be liberated from dynasties, in this case the petitioner,” the affidavit read in part.

Githongo added that some IEBC employees also helped the hackers manipulate the results.

However, Ruto’s team of 54 lawyers rejected all allegations made in the petitions, claiming that he had been duly elected. Led by former Tharaka Nithi senator, Kithure Kindiki, they also rejected petitions filed by Azimio la Umoja presidential candidate Raila Odinga and Martha Karua.

The Supreme Court headed by Chief Justice Martha Koome will rule on the petition on or before Monday, September 5. 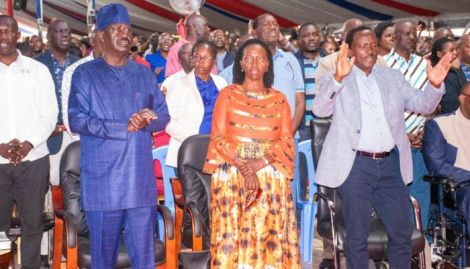 From left to right: Azimio flag bearer Raila Odinga, Martha Karua and Kalonzo Musyoka in a church service in Donholm, Nairobi on August 21, 2022