Vice President Rigathi Gachagua, nicknamed ‘Riggy G’, has been subject to memes and viral captions not only because of his clothes, but also because of his public speaking skills.

Comedian, KK Mwenyewe, thus seized the moment and captivated it with a perfect impression of the second in command.

Appear on Dr Ofweneke TV broadcast on TV-47 on Wednesday, September 21, the student of Kisii University amused the public by mimicking Rigathi’s reaction after winning the general election.

He also went the extra mile to mimic Gigathi’s big belly by apparently stuffing pieces of clothing under his wrinkled shirt.

Meanwhile, Azimio La Umoja Coalition running mate Martha Karua recognized the comedian after she commented on one of his skits.

In the skit, the ‘Riggy G’ impersonator stood next to a female comedian impersonating Karua. The sketch mimics the heated debate over how Kenya Kwanza Alliance defeated Azimio to win the presidency.

“MK got it right!” Karua responded to the video.

However, the computer science student revealed that his skits have yet to be recognized by the vice president.

“I haven’t heard from the vice president about my act. I hope they reach him and he will call me to his house with Karen for a meeting,” he stated.

Despite his career choice, the Kiambu County comedian is passionate about the entertainment industry. The host promised to accompany him.

Gachagua, in response to his fashion sense, stated that he had gone back to the gym to lose weight and also improve his dress code. 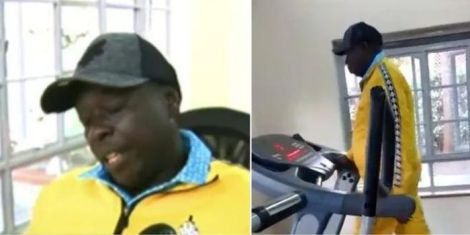 “A lot of people have asked questions about how I dress. I didn’t have the luxury of looking at how I dressed.

“My eyes were always over my shoulders and taking care of my family,” stated Tuesday, Sept. 13, before the inauguration ceremony.

His wife, Reverend Dorcas Rigathi, had revealed that she was in charge of the DP’s dressing. She irons his shirts, a tradition she has honored for years.

“Well, I’ve already ironed his shirt, that’s very special to us and I’ve done that the longest,” noted on the inauguration day.